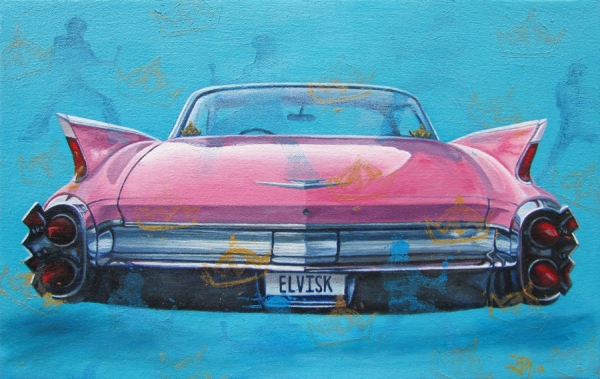 There is an interesting story that goes along with this particular car. It goes back to when I purchased my first car that started my whole car painting craze. It was a 1973 Dodge Dart purchased from an old man named Winsper in Warwick Rhode Island. My husband and I drove it back to our Rockaway Beach studio.  Quickly I understood I needed a mechanic.  I was referred to one in Long Island City by a neighbor from our Brooklyn days.  His name was Sal and he ran a somewhat underground garage with no windows and a few big crazy dogs. Sal worked on mostly classic cars and did custom paint jobs (did I say there where no windows or vents in his garage?)

Sal was a short Italian guy (I think I had 3 inches on him at 5 ft 2) who only drove really big cars including this pink Cadillac with tricked out fins and a late 60’s two toned Lincoln.  Sal was also an Elvis impersonator. I wish I had taken more pictures because the guy had the trunk of this car lined with satin and filled with Elvis collectables. He was into it.

He was not the greatest mechanic, but he wasn’t a gouger either. I drove the dart with a broken tie rod for the first year and a half  I had the car thinking that was just how they handled. Eventually, he was unreachable due to numerous hospital visits for some respiratory illness. I think well of him and I often wonder where that ol’ car might be now.

View all posts by sliderarts

gwendolyncarart [at] me [dot] com