“Dirty Night” is a new painting created for The Peekskill Coffee House group show dedicated to the work of Alfred Hitchcock. Alfred was a master of creating visual tension, discomfort and fear and since the majority of his films have lots of fantastic classic cars in them this was great fun to research and create.  I ran through a bunch of his films while deciding which one would inspire my painting and was just blown away while playing them in slow motion and stopping the DVD’s for still shots. 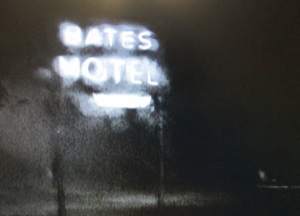 “Dirty Night” was a line uttered by Norman Bates in Psycho. The car is a 1957 Ford Custom and was driven by Janet Leigh’s character Marion. After Marion was butchered in the shower scene, Norman stuffed her in the trunk of her car and pushed the car into the swamp. The image has the shadow of Norman cast across the trunk.

View all posts by sliderarts